Is Your iPad Causing You Neck and Shoulder Pain? 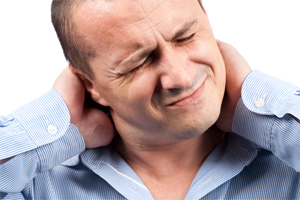 It is estimated that up to 300 million tablet computers such as the iPad may be sold by 2015, which seems entirely possible, given their ubiquitous appearance on trains, in cafes, and even at the supermarket. It has already been shown that frequent texting on your mobile phone can cause problems with neck pain, but those who use their tablet for everything from surfing the internet to watching full-length movies may be in for even more pain. Commonly referred to as “iPad neck,” increasing numbers of people are showing up in their chiropractor’s office with neck pain and stiffness due to the use of this device.

The results of a study published in Work: A Journal of Prevention, Assessment, and Rehabilitation, found that the use of tablet computers was associated with greater head and neck flexion than traditional desktop computers and that placing the tablet higher on a table and using a case to put the tablet at a more optimal angle could help prevent neck and shoulder problems.

Researchers from the Harvard School of Public Health, Brigham and Women’s Hospital and Microsoft Corporation studied 15 volunteers who were regular users of tablet computers. The subjects performed simulated tasks on an Apple iPad2 and a Motorola Xoom, during which the posture of the head and neck, the subjects’ gaze angle and gaze distance were measured by a three-dimensional infrared motion analysis system. They surfed the internet, wrote e-mails, watched movies and played video games.

Each tablet came with its own proprietary case that enabled users to set the tablet at different angles. The Apple case allowed for 15° and 73° tilt angles, while the Motorola case allowed angles of 45° and 63°. Greater flexion of the neck was found with the iPad2 when used in its case. Not surprisingly, tablets set at the least perpendicular angle caused greater neck and head flexion than when the subjects used a desktop or laptop computer. Head and neck posture only began to approach a neutral position when the tablets were set in their cases at the Table-Movie angle in which they were closest to perpendicular.

The researchers recommended that tablet users place the devices on a table and at the steepest viewing angle possible to avoid neck and shoulder pain. However, they cautioned that this configuration might cause problems for the arms and wrists, which in this configuration are not optimally placed for input and can lead to problems of their own.

If you just cannot conceive of giving up your iPad, in addition to reducing the amount of time you spend using it, consider seeing your chiropractor on a regular basis. Chiropractic care has been shown to be more effective in treating neck pain than using pain medication. A chiropractic adjustment can realign neck vertebrae and take the pressure off compressed nerves, bringing relief in a gentle, natural manner and allowing you to use your tablet more comfortably.